Good news for parents and educators alike! North Vancouver is opening its new museum MONOVA starting December 4, 2021 at 115 West Esplanade in the Lower Lonsdale Shipyards District. It won’t be a traditional, ‘look but don’t touch’ museum. No, no, this one will be filled with engaging activities, making it perfect for an outing with children. Though, that’s not to say it’s only for children, however. Teens and adults will also find mature, yet engaging exhibits to peak their interest.

Plus, once a month, the museum will open for “sensory-friendly” times, catering to children with Autism Spectrum Disorder or neurological differences.

Children of multiple ages (and adults alike!) will be able to participate in hands-on learning experiences.

Keep reading below for a summary of what the museum will have to offer:

All aboard! Climb onto a refurbished streetcar 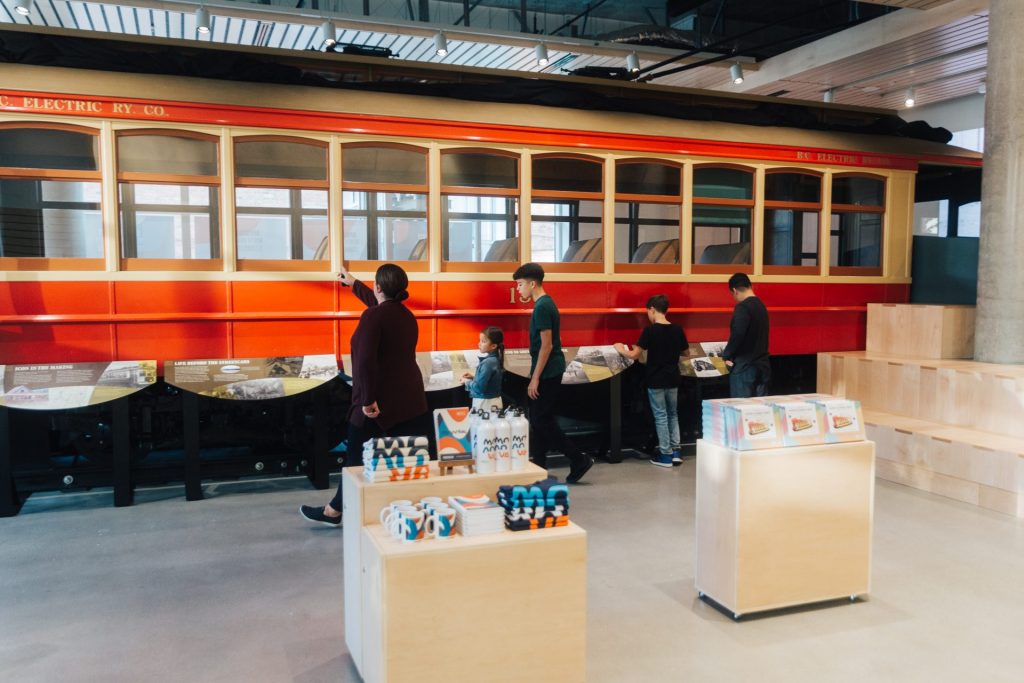 Before buses became popular after World War 2, this particular streetcar was a means of public transportation for North Vancouver residents. According to bchistory.ca, it ran along Lonsdale Ave from 1912 to 1946.

There won’t be any rides (the structure is stationary). But it will be fun to climb aboard and listen to live, actor-interpreters animate the streetcar!

Be a longshoreman! Load and ‘X-ray’ shipping containers

In what MONOVA calls a “Learning Zone,” there will be an “Interactive Port.” It’s meant to help children learn about shipyards in North Vancouver. They’ll be able to load pretend ships with containers and can even ‘X-ray’ the containers to see what’s inside!

Create your own neighbourhood 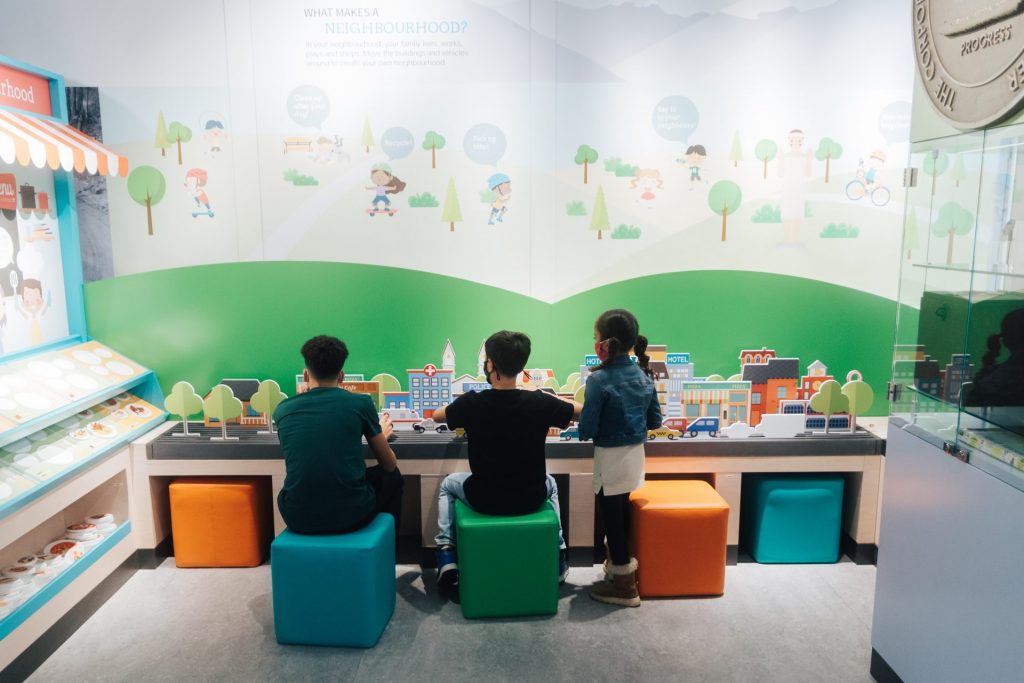 In another “Learning Zone,” there will be a set of toys resembling neighbourhood objects and scenery, like bikes, trees, buildings, etc. Children will be able to ‘build’ their own communities.

Alongside the neighborhood toys, there will be an interactive kitchen where children can learn about food from around the world that is eaten in multicultural North Vancouver.

The museum will host parent-toddler sessions whereby little ones can learn about the history, culture and surroundings of North Vancouver. Presenters will use books, artifacts, songs and drama to explore themes (such as ‘the mountains’), or share stories of things that happened in the city.

Children will be able to learn about science, as it relates to geology and ‘saving the trees.’ In 20-minute, audience-participation shows, the museum will use theatrical presentations to engage children with tree identification games, log friction activities, logging simulations and more.

Hunt for fur and animal poop! 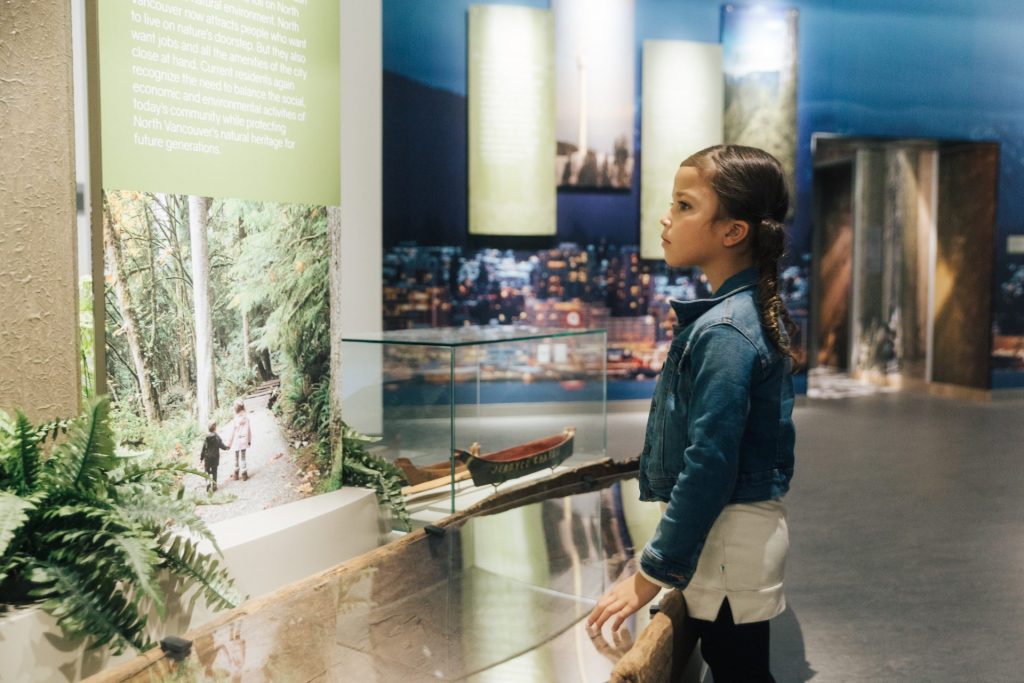 In an interactive animal exhibit, children will learn about North Vancouver creatures, such as bears, cougars, eagles and hummingbirds. They’ll be able to touch the fur and footprints of various animals, and open drawers to discover different kinds of animal poop!

Walk through a Coast Salish garden

The museum’s Indigenous Cultural Programmers have put together a Coast Salish plant garden at the museum. It will include seasonal walks, Coast Salish arts and knowledge sharing by Sḵwx̱wú7mesh and Səl̓ílwətaɬ community members. Opening Summer 2022.

And so much more!

Above, we’ve mentioned just the ‘kid stuff.’ But the museum will be filled with exhibits catering to several age-groups, including teens and adults.

In fact, there will be over 9,000 artifacts at the museum, which took over 50 years and $7.6 million to compile. The museum building itself was a feat to overcome; it’s taken decades to find a permanent ‘home’ for these artifacts. And now, it has one, near the Lonsdale Quay, The Polygon Gallery and SeaBus Terminal in the Shipyards District.

The museum will showcase for the public a large array of themed, historical exhibits. From North Vancouver sports, women during the war, industry and shipbuilding, animals, culture and more.

Notably, it will feature Indigenous art and programming including a Welcome Circle, a cedar carving of Sch’ich’iyuy (The Two Sisters) by Skwxwú7mesh (Squamish) carver Wade Baker and a tribute to Residential School survivors and their loved ones.

Initially, the museum will be open just four days a week, from Thursday to Sunday starting at 11 a.m. until 5 p.m. It will close at 4 p.m. on December 24 and 31 and closed on December 25 and January 1. In 2022, the museum plans to announce extended hours.

More information can be found at monova.ca/visit